Using the theoretical framework of Lukes’ three faces of power, this essay will discuss the media’s plurality in the United Kingdom (UK). This response will determine the affect media practice, both from a pluralistic point of view and government approval have an effect of the democratic health of the country. Specifically, the effective participation, enlightened understanding and control of the agenda clauses of Dahl’s theory will be applied throughout the essay to see how media plurality should in theory enhance a thriving democracy, but in reality and practice, fails democracy in the UK. The essay will effectively be split into three parts, using Lukes’ three faces of power, explicitly, the issue method, setting the agenda and, manipulating the view of others theories will be applied 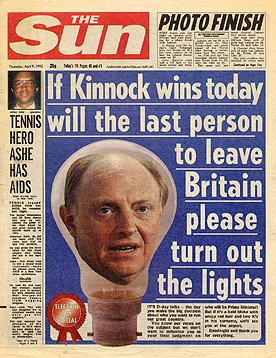 Both the political landscape and the printed media coverage for the 1964 election campaign and its 1992 counterpart are remarkably similar; the outcomes, however, reveal a stark contrast. It is this fascinating juxtaposition between the two respective results which provides the spark for this exploration, including how it potentially hardened the future Labour leadership’s resolve to court a previously hostile media organ, in glaring contrast to the previous incumbent’s ambivalence. The 1997 campaign’s success was achieved in no small part through  political courtship (and subsequent mutual support) of Rupert Murdoch, following Blair’s ascension to the leadership of the Labour Party in the aftermath of John Smith’s untimely passing in 1994. Blair was also assisted by the implosion of the Conservative party under John Major’s leadership END_OF_DOCUMENT_TOKEN_TO_BE_REPLACED

There is a natural suspicion of time-served journalists to the ever-expanding genre of citizen journalism. END_OF_DOCUMENT_TOKEN_TO_BE_REPLACED

This essay will compare, contrast and discuss the differences between public interest journalism and journalism that is of interest to the public. The essay will attempt to decipher where the lines of the two aforementioned concepts become opaque whilst at the same time, acknowledging the mutual interest of the necessity to public knowledge and gratuitous salacity.

Journalism that is in the public interest is the fundamental backbone to a functioning democracy. In theory, END_OF_DOCUMENT_TOKEN_TO_BE_REPLACED